What About Micro Inverters?

How do they work?

Traditional (string) inverters require panels to be electrically linked together in what's called a string (like a chain). Depending on the size of the system you can have one or more strings usually comprising of a minimum of six or so panels, but often quite a few more. Wiring is then taken back from the string of panels to the inverter, usually located near the switchboard. The inverter then works out the optimal operating point for the entire string. 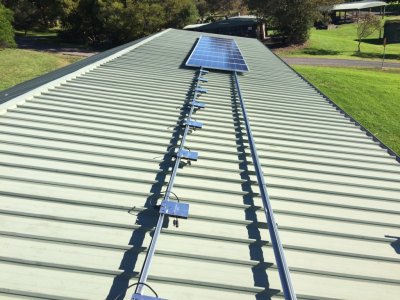 Micro inverters are mini inverters that are usually placed under the panels (see accompanying picture). One micro inverter is used for each panel (or with some brands one for two panels). It thus gives independent control of each solar panel rather than one inverter controlling all the panels.

What are the pros and cons of micro inverters?

Some of the pros include: More flexibility in designing systems - particularly valuable if you have several roof sections with limited space; Can add more panels later; Much less affected by shading. With string inverters if one panel is shaded then all the panels in the string are affected - with micro inverters, only panels that are actually shaded are affected; Allow you to monitor your electricity consumption as well as your solar production.

What are the cons? As there are more components, there is more chance of something going wrong. Unfortunately, we have seen quite a few issues and failures with micro inverters. Some of the warranties only cover the component - which means you would be up for the labour cost to replace faulty components. Micro inverters rely on communication via normal power cables. Sometimes appliances in the home can create "noise" that disrupts the communication. This can show up as faults in some (or all) of the micro inverters - even though they are still producing power ok. If you have this problem (which is not uncommon) it means you are never quite sure what's going on with the affected inverters - so optimizers, as discussed below, can be a more reliable option.

But perhaps the biggest con is the price. Using premium micro inverters usually works out considerably more expensive than string inverters. That leads us to the final question. -

Are micro inverters right for me?

However, there is a good alternative - Optimizers. Optimizers are now also available (these are also fitted behind the panel but work with a normal string inverter). These provide at least as good mitigation of partially shaded conditions and usually work out much cheaper as you can use them selectively rather than on the whole system. They also can provide some of the other advantages of micro inverters such as flexibilty in designing systems - but more inexpensively than micros. In shaded conditions we generally recommend using optimizers with a string inverter.

Where shading is not a factor, then it comes down to preference and budget. Despite the additional cost and the cons of micro inverters, the pros may still appeal to you. Otherwise there are lots of good choices in string inverters.

Micro inverters have both pros and cons.....

When it comes to micro inverters we recommend using only premium quality inverters....